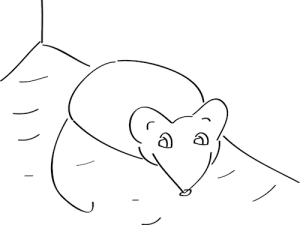 Just what is a mouse looking for when it sniffs around the floorboards in your attic? He or she might be attracted by darcin, a pheromone found in the urine of male mice. Your murine roommate might also be exploring an area where this beguiling protein, named for Mr. Darcy of Pride and Prejudice fame, used to be.

In study published this week in Science, biologists lead by Professor Jane Hurst at the University of Liverpool in England show that both male and female house mice will remember the location of darcin, even after any trace of it has been removed.

“This attraction to the place they remember is just as strong as attraction to the scent itself,” explains Hurst in a press release from the university. Indeed both male and female mice will remember and spend significantly more time at a site where either male urine or darcin alone used to be. They can even remember this location for up to a fortnight after just a single visit. However, once a mouse revisits a place, and discovers that the scent is no longer there, it will not remember the spot on subsequent visits.

Darcin is not volatile like some of the other scented components of urine, so the mice have to get up close and personal in order to feel its effects. In fact, in the absence of darcin, a female mouse does not respond to any of the airborne aromas of a potential mate’s leavings. While a male mouse will recognize a competitor’s airborne odors as different from his own even without darcin around, he will not remember its location in the future.

In addition to promoting the memory of a specific place, darcin can prompt female mice to learn an individual male’s scent. They will then be drawn to that scent, and not to the scent of another male, after darcin has been removed.

This pheromone-inspired learning and memory behavior has not been widely recognized before and is both “reliable and rapid”, say the biologists. Darcin may therefore provide a new handle for scientists to study what happens in the mouse brain when a memory is formed. For now, however, darcin will only serve to tell your upstairs neighbor that there was a friend nearby.