Over and over again. 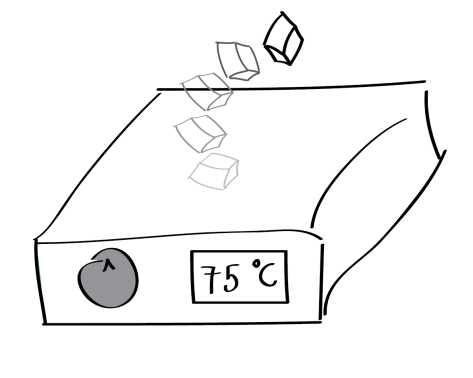 Schoolchildren learn that matter exists in three phases: solid (e.g. ice), liquid (water), and gas (steam), but many materials’ most interesting behavior comes from the rare phases that exist somewhere in between the familiar ones. When scientists exploit this behavior, a blizzard of new technologies becomes possible.

In an ice-crystal, as in all crystals, the water molecules organize into an ordered pattern. When ice is heated, the water molecules begin to move, the pattern collapses, and the ice melts. But not every crystalline material behaves like ice. When the right type of crystal is heated, it will jump to heights 10, 100, or even 1000 times its size, like hot chestnuts popping out of a pan as they release steam. These crystals don’t jump because of steam, but because of a rarely observed phase transition, where all of the molecules in the crystal move at once, but the material remains ordered and crystalline, one pattern transforming to another in an instant. Only around a dozen materials that can directly convert heat into movement are known, but scientists hope they can be developed into simplified motors that mimic those found in nature.

Professor Panče Naumov of New York University in Abu Dhabi is spearheading the effort to understand these strange “jumping crystals” along with an international team of researchers in the United Arab Emirates, at the Max Planck institute for Solid State Research in Germany, and at the National Institute for Materials Science in Japan. In an article published online in January by the Journal of the American Chemical Society, the scientists report the first jumping crystals that can fling themselves aloft over and over again. This is only the latest in a string of papers by the team that sheds light on this strange, poorly understood phenomenon.

Like with all phase transitions, it comes down to the molecular level. The researchers found that when a jumping crystal is heated, energy builds in the form of tension between the molecules arranged in the crystal. Once the temperature reaches around 75 ºC, all of the molecules move in unison, and the tension is released in the form of a jump. While each molecule moves only a small fraction of a nanometer (about ten-million times smaller than the crystal itself), the combined movement of all the molecules together leads to a rapid change in the crystal’s shape. It is that shape change that causes the crystal to spring up into the air.

For most jumping crystals the same forces that cause the jump can also blow the crystal apart. Naumov and his colleagues posit that their crystals can withstand those forces because they are relatively soft and flexible. The crystals described in JACS can carry on jumping through repeated heating cycles without sustaining any detectable damage. These crystals will also hop once when cooled to very low temperatures–the result of another phase transition. Unfortunately, that lone leap leads the crystal to a wintery grave, but as long as it is kept out of the cold, the crystal will survive to jump another day.

This is exciting news for scientists who hope to use these materials for mechanical work. While you should not hold out this winter for jumping crystal powered machines that will stir your cocoa, the scientists hope that their findings will aid in the design of new varieties of resilient jumping crystals that can be incorporated into tomorrow’s most energy efficient devices.